Go from "overlooked" to "OVERBOOKED"

Important! Read this first
(and the rest of the page will make more sense).

​The following screenshots are examples of real businesses that we have ranked. These screenshots were taken directly from Google but the sites are also ranking well (sometimes even better) on other search engines like Yahoo, Bing and AOL as well. Feel free to run the searches yourself but we did not want this page to go on forever (but we did want to get our point across). If you want to rank, we can help!

*Note: We only work with 1 type of business (like "Chiropractor" or "Dentist" or "Roofer") per area because we strongly feel we cannot offer our 100% best to two people in the same area going for the same keywords. That means that if you work with us you lock out your competition.

QT office is a software company that services the women that sell Mary Kay@ cosmetics. Mary Kay@ is a multi-billion dollar company and has millions of sales representatives so ranking nationally for prime keywords is a big deal. We have managed to rank in the number 1 spot for multiple prime keywords (as shown below).
As you can see we have ranked QT Office number one for "Mary Kay Software". This search term generates tons of new business for QT Office and saves them thousands in advertising dollars a month. Not only do they have the top spot but they also have 2 YouTube videos ranking on the homepage as well. That means they have 1/2 the first page advertising their business. How much would that affect YOUR business? 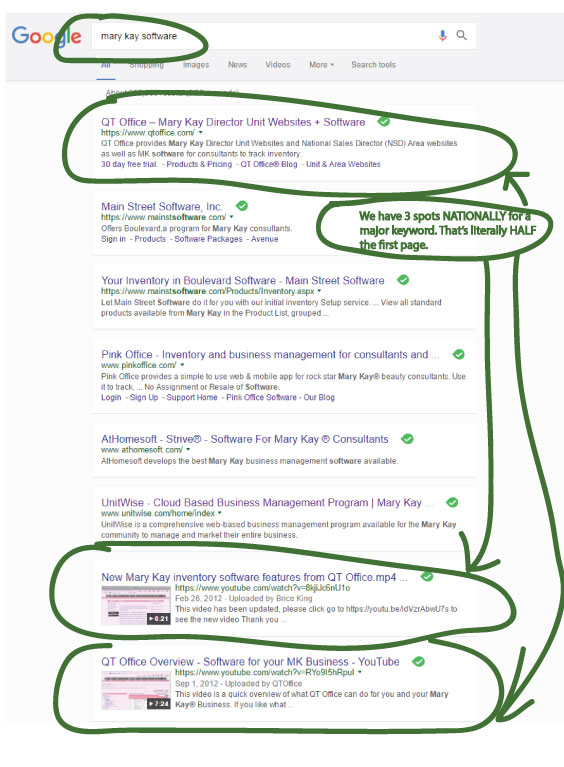 In addition to ranking for the short keyword "Mary Kay software" we also rank well for many other versions of this keyword such as "Mary Kay Inventory Software", "Mary Kay software for mac" and "Mary Kay tax software". Note that the top spots are paid ads (which most people skip over anyway because they know they are ads). We hold the number 1 spot. Each keyword could be worth hundreds if not thousand a month. 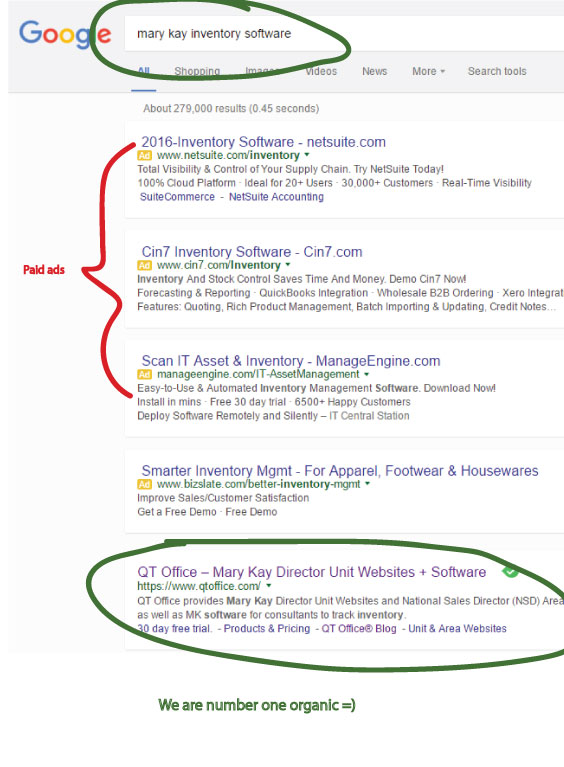 In the picture below we are not ranked number one, but we are the very first option that is Mary Kay@ itself. This is a HUGE deal because Mary Kay@ is a multi-BILLION (yes, with a "B") company that has been around since 1963.  That's a crazy head start (but we are catching up!). 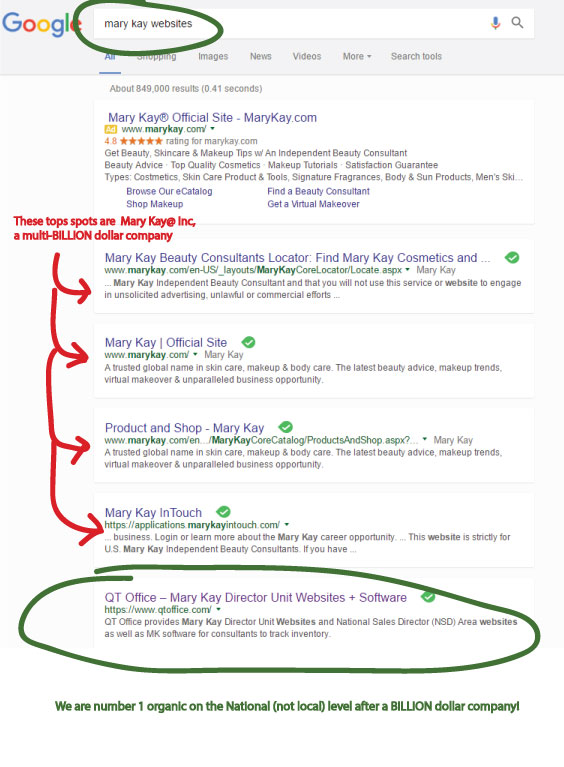 RVA Paving  and Richmond VA Paving are "brand" websites owned by a local paving contractor based out of Richmond VA. When we first met the owner he told us "I get small jobs all the time but I want some bigger jobs" so we put our focus on the large jobs. That means parking lot paving. Take a look at the screenshots below, you will see first page ranking for several areas for "parking lot paving". We are also ranking him for "driveway paving" and specialty kinds of paving like "Tar and Chip paving". Just because we are ahead with the main goal keywords does not mean we are going to stop ranking the lower paying (but still money making) keywords! The business owner has said that we (on average) are generating around 30,000 in leads for his business every month and we have more than doubled his business. 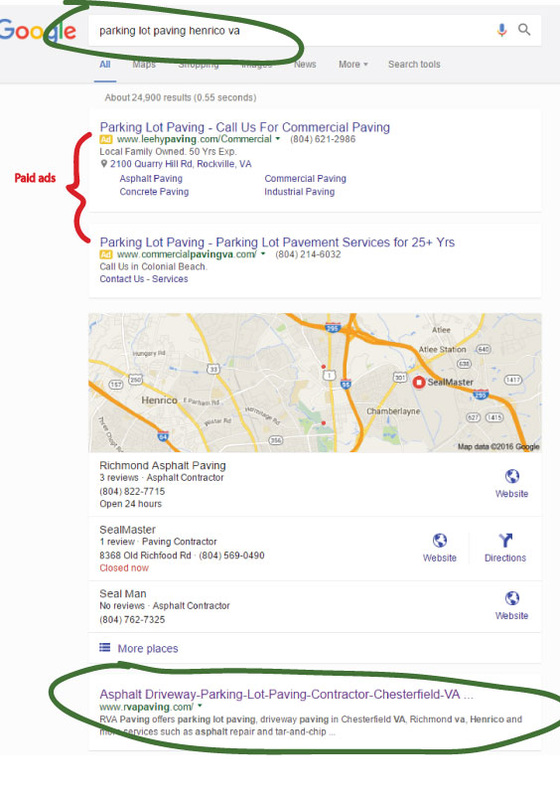 Here is a screenshot of the number 1 spot in Chesterfield VA, population 1/4 million people. 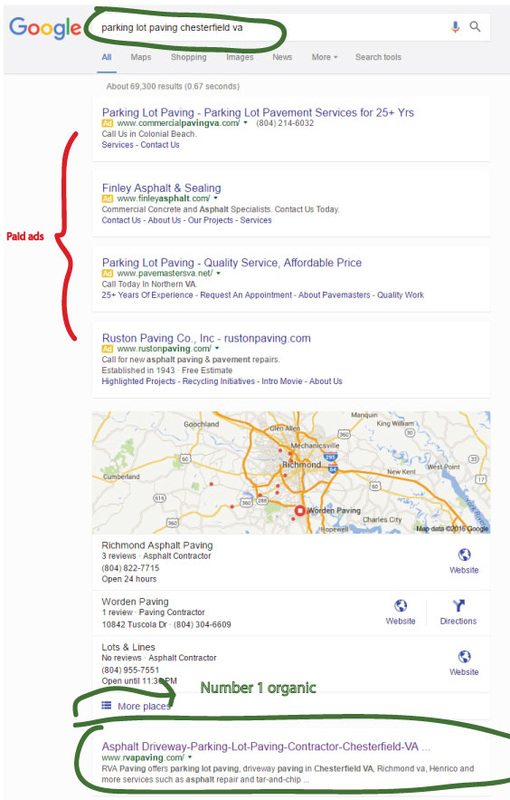 Just because we are ranking great in the high population cities does not mean we don't go after the surrounding counties as well. They do not have as many people but there are still several hundred thousand people which means tons of new customers that need services. Here are three smaller areas we are ranking great in (in addition to the larger prime target areas: 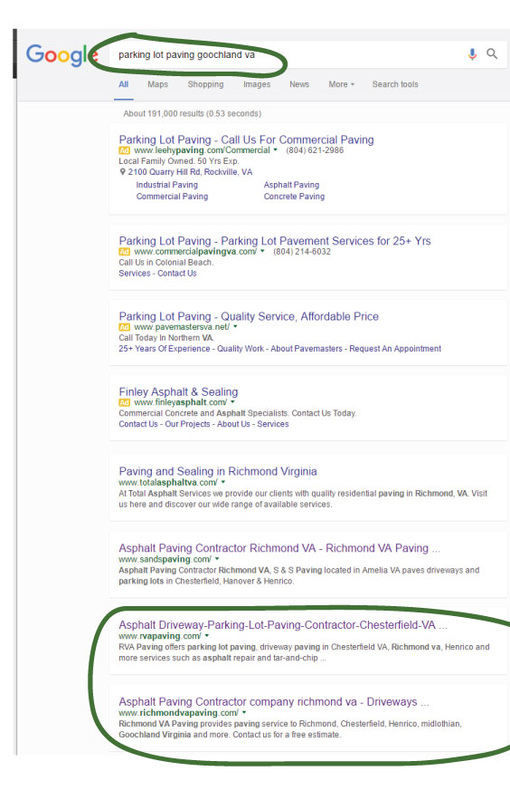 Number one in Midlothian VA, population around 50,000 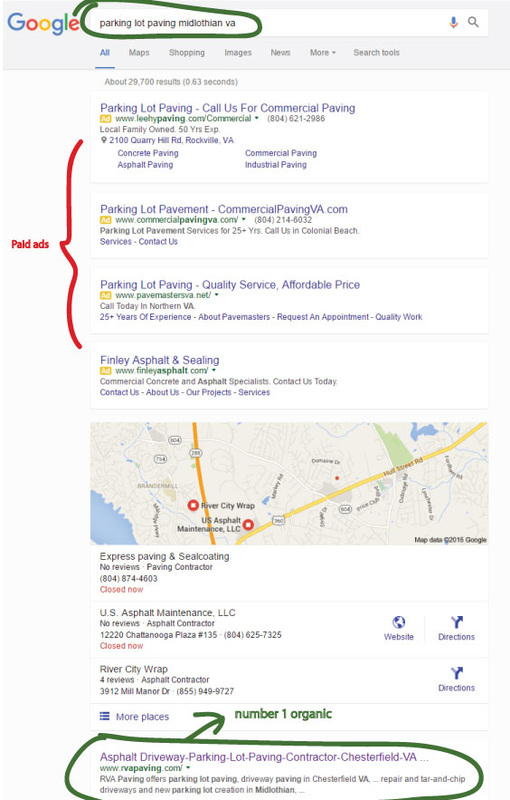 Parking lots are big money but driveways are still the great income generators so we also go for those leads as well (and why wouldn't we?). 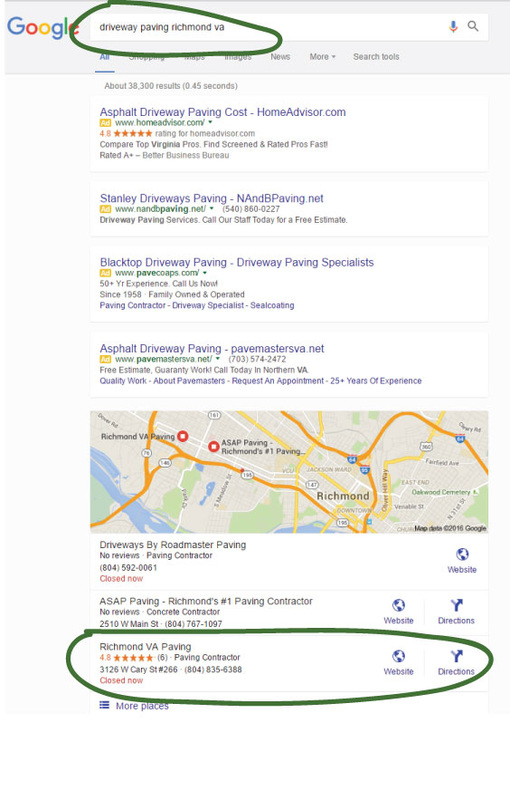 Our third company wanted us to build two website for them to double the leads coming in (No problem!). They had tried other marketing services and told us that "we always spent way more money than we get back". They do not have that problem any longer. They are easily getting back their small monthly investment with us 5 times over. We have them ranked for their main keywords like "mold removal" in their local area. How much would that be worth to your business? But don't take our word for it; see what Google has to say (screenshots below):
In this screenshot you can see that we have taken up 2 out of the 3 map spots as well as the number one organic spot for "Mold Removal Richmond VA". Nothing says "call my business" like taking most of the keywords on the front page. Notice that the top spots are all ad spots. How often do YOU click on ads? I didn't think so.... (and most other people do not either). 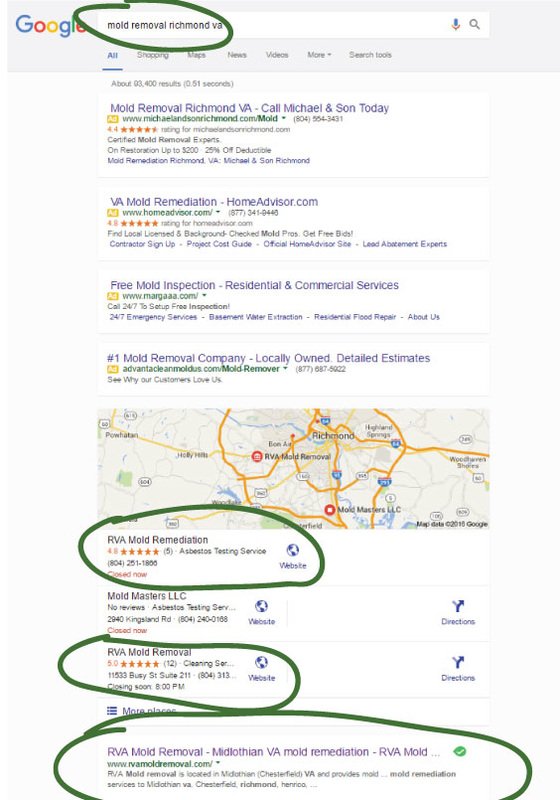 Here is another screenshot that shows we are top in the maps as well as the top organic spot for another area with around 250,000 people. The leads never stop... 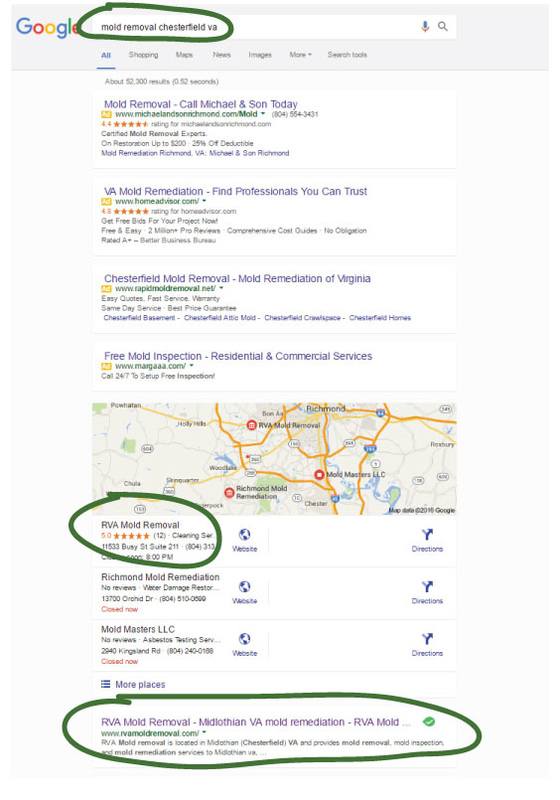 There are several "Smaller" areas such as the one shown in the screenshot below that we rank number 1 in as well. These "small" areas (around 50,000 people) generates tons of great customers for our business owners.  Not to mention that there are several "small areas" around most cities that add up to a lot of people when they combine. 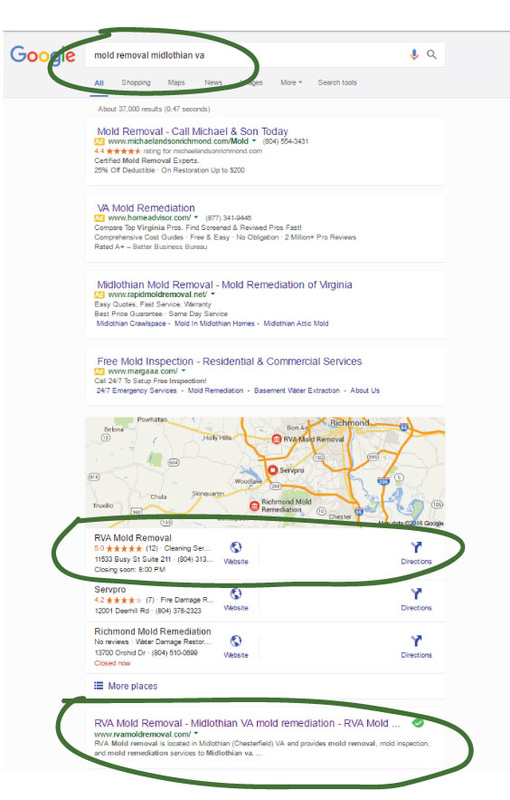 Kelly (the business owner) was referred to us. He had a website that was ranking on page 5 on Google and did not generate any leads (when was the last time you went paste page 1 to find a service provider?... probably never). We were able to get him the number 1 spot in 3 short months. He went from zero calls a month to around 80 calls a month. 80 CALLS! After we built 2 new sites for him (one in the main city and one in a nearby county where he lives). Wow, 80 roofing calls extra a month, that's a lot of business!!! The best part that he provides quality work and has a great close ration (free estimates that turn into work). Here are some screenshots for proof below:
Looks like I forgot my awesome green circles but you can clearly see the search term in Google for "Roofer Richmond VA". We have the number one map AND the number one organic spot. The top is taken up by people wasting their money on ads... 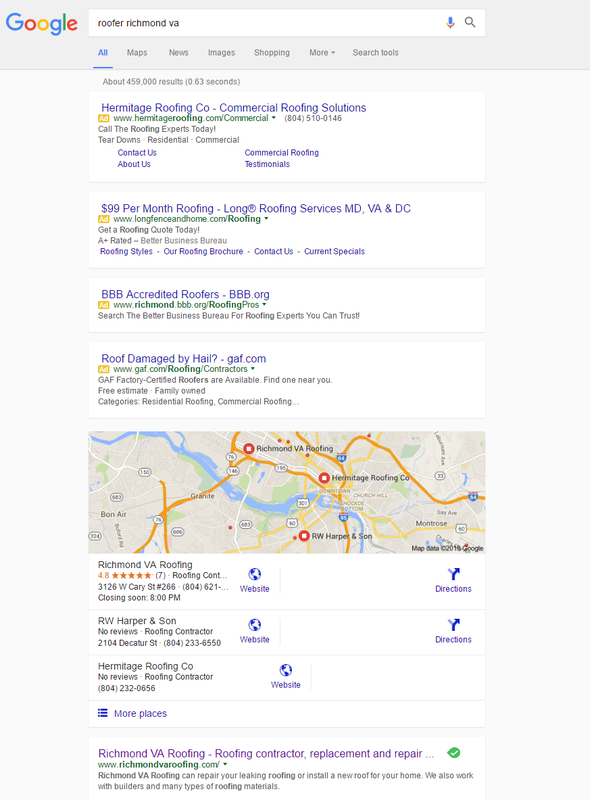 Here is another screenshot (with my awesome green circles) showing the search term "roofer Powhatan VA" and his number one organic listing and number two map listing. 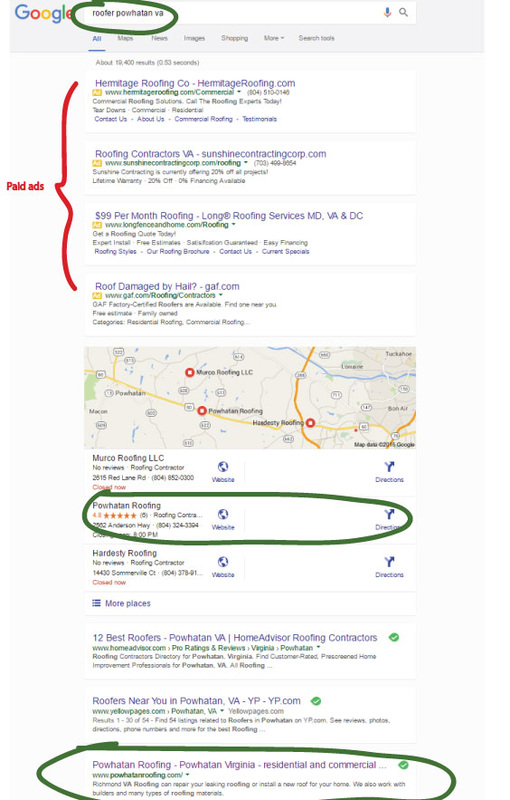 Dr. D'souza (whom we affectionately call "Dr. D"" is an amazing person. Not only is he a doctor of chiropractic but he also has a master degree in nutrition. We met Dr. D. when my wife when in to get help with her write locking up (she's was 33 at the time and had suffered Fibromyalgia for most of her life). Dr. D diagnosed the issue as inflammation as opposed to nerve or bone issues, gave Jamie (my wife) an "Alcat" (blood) test that revealed that she had food intolerance for 42 foods. After that we took the foods out of her diet and after 17 years of living in pain she was pretty much cured. I know this does not really go into the marketing bit but I like to tell people this because 1. He's an amazing doctor and if anyone is suffering from Fibro and lives in the area they should go see him and 2. These are the type of people we want to work with; Amazing people that can really help the community!.

With that said, Dr. D's website was on page 3 of Google and generated zero leads. He tried all types of advertising like yellow pages (dead), pay per click (expensive and generally does not make great returns), in-person seminars (a huge time commitment), and flyers (yup, he tried everything!) None of that worked..... but what DID WORK was getting to the number three spot on Google. He has over doubled his customer based and is now booked two weeks out in advance. He went from struggling about his next rent payment to shopping for an office to buy. Thank you for all you have done for us Dr. D. and we are glad to share your healing abilities with the world!
Here is the proof: Also note that the two spots above him have 5 or 6 offices... but we will still overtake their spots. It will just take a little more time. 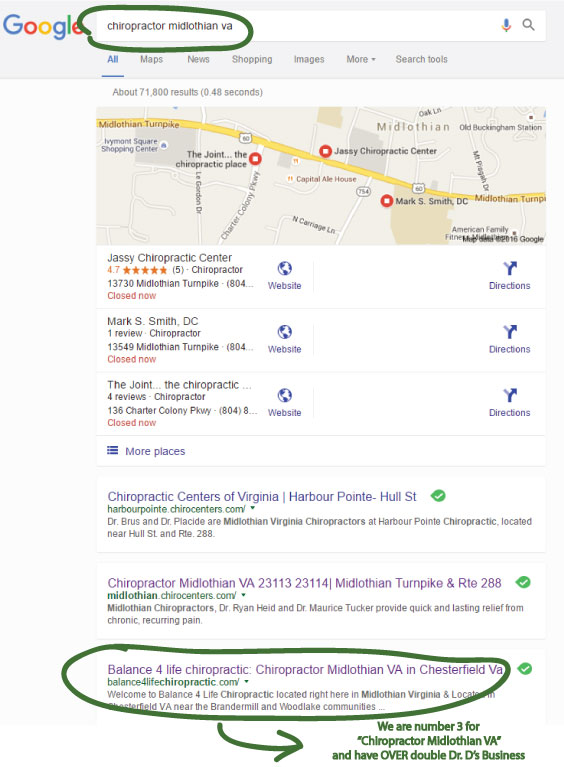 ﻿﻿﻿Here is a classic example of a business owner that was actually ranking on the first page of Google (but on the bottom). You would think that would be enough to generate a lot of leads but you would be surprised on how quick the calls drop off after you get to the number 4 spot (and it gets worse as you get to 5 ,6, 7 and beyond. We were able to get his business at the top of the maps (and are climbing the organic results as well) and the leads have been flowing in ever sense.
Here is the proof: 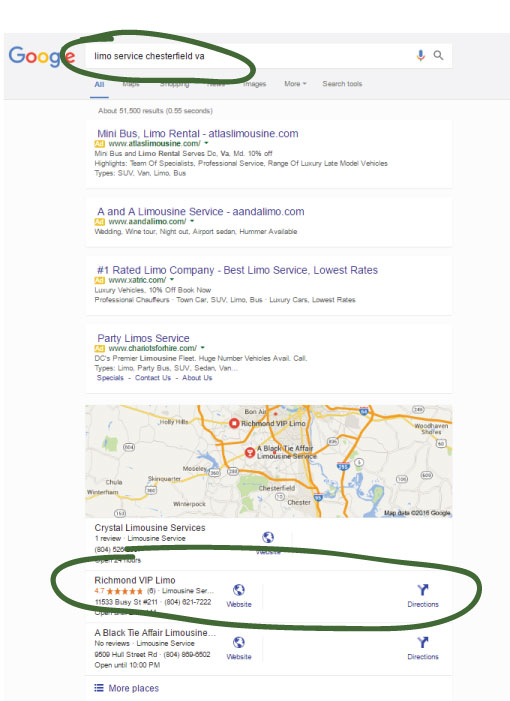 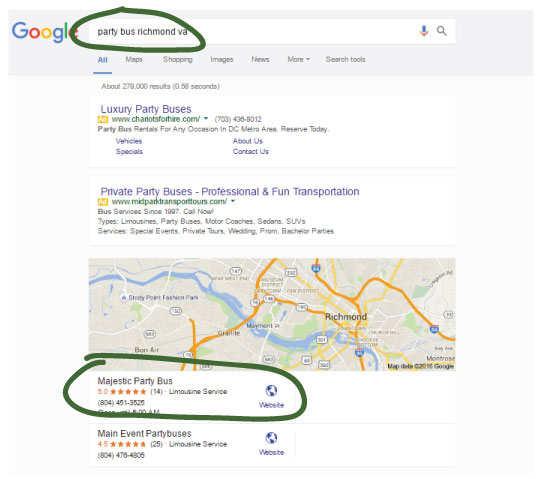 We started working with a local dentist that was buried on page 5 for their main search terms. Since we have started working with them a year ago we have moved them all the way up to the number 4 position for their major keyword (and climbing!) and number one for several long tail keywords that generate a lot of business (such as "dentist that accepts DenteMax  Richmond VA" (someone doing that search is ready to get some work done!)
Here is a screenshot showing his number 4 position but we should be updating that soon to the number 3 spot! 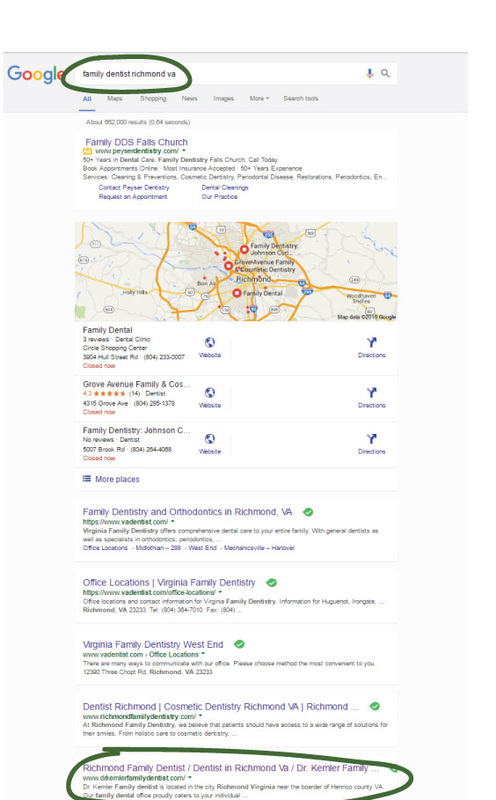 Lamont is a very smart business man that "wants it all". He told us "you grow us as large as you can and I will grow my staff to keep up! That's what we like to hear! We went all out and built several sites for him (3 roofing and a remodeling site with multiple locations) and have already ranked 2 of them and are watching the other sites climb the ranks. It's an amazing feeling to watch your efforts pay off. Lamont would agree with that as well. One of his sites alone generates around 50 to 70 leads a month (a roofing site) and although his remodeling site does not generate as many (yet) because it's still ranking he is able to close deals worth over 10 thousand dollars. It will only get better from here. See the screenshots below for a couple of his roof websites that are top 1 and top three respectfully and a remodeling site that was created a couple months ago that is number 1 in the maps and already generating leads. We look forward to working with Lamont for a long time to come and watching him become one of the largest contractors in his area (not to mention a millionaire). =)
Number 1 roofing site in Charlottesville VA and it generates around 50 to 70 calls a month: 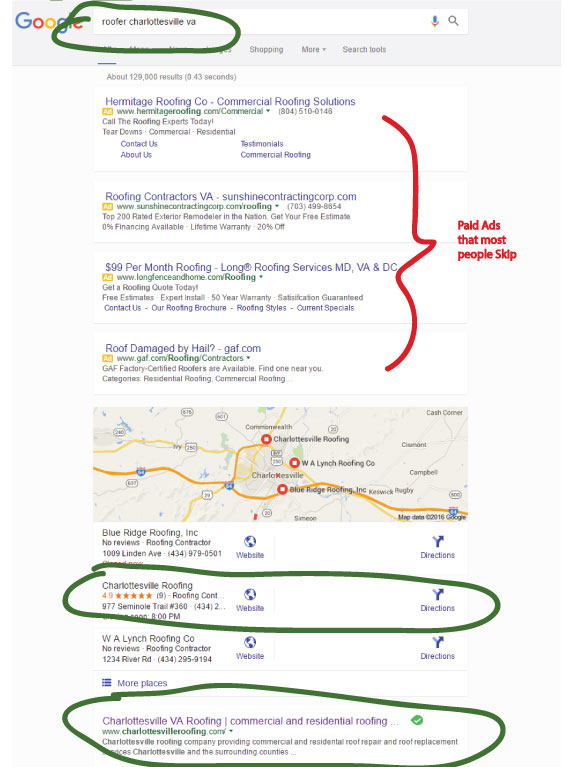 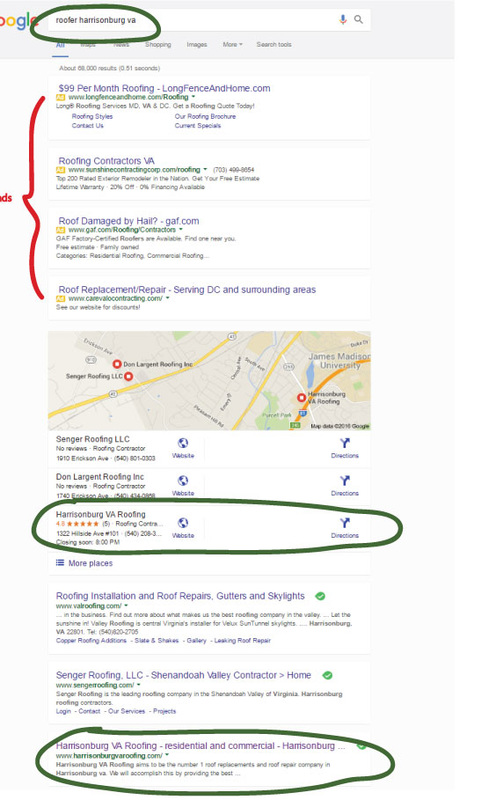 Two month old lead site (as of the time this screenshot was taken) already ranking number 1 in the map pack. We are also working on 2 more locations. This is going to be a money-generating powerhouse! 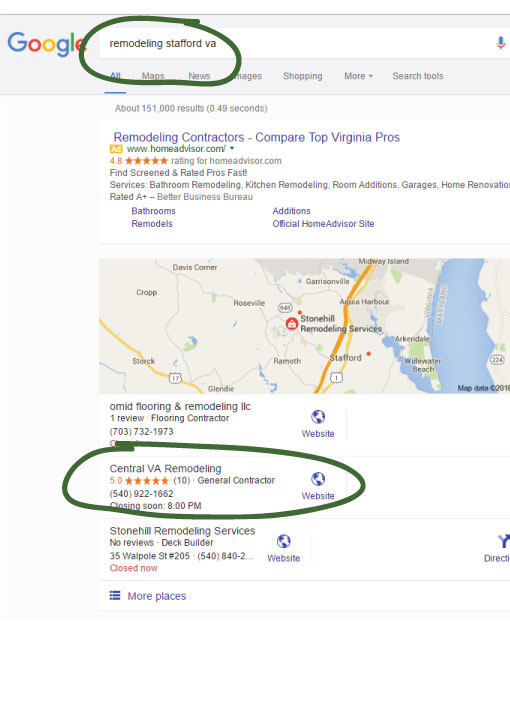 Seriously? You read this entire page and have not contacted us yet?

We would love to add your business to our results page.
Contact us to get the party started.